The vessel had been undergoing sea trials on April 22 when one of its recently rebuilt engines caught fire. 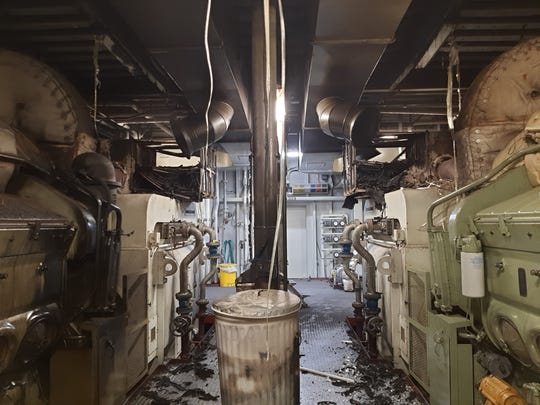 A view of the engine room where a fire broke out on the ferry Wenatchee on April 22. (Photo: Contributed photo / Washington State Ferries)

Update: After this story was originally published, Washington State Ferries spokesman Ian Sterling contacted the Kitsap Sun to correct his earlier statement that a CO2 fire suppression system had been used to extinguish the fire on the Wenatchee on April 22. That system was not used, and crew members were able to contain the fire with "traditional firefighting methods," he said. This story has been updated with that information.

Three agencies are investigating a fire that damaged an engine room aboard the state ferry Wenatchee last week.

The vessel had been undergoing sea trials on April 22 when one of its recently rebuilt engines caught fire, Washington State Ferries spokesman Ian Sterling said. There were no passengers aboard the vessel at the time, and no crew members were injured in the blaze.?The vessel was towed back to the state’s ferry maintenance facility in Bainbridge Island's Eagle Harbor for work.

Washington State Ferries, the Coast Guard and the National Transportation Safety Board are investigating the incident, Sterling said. No damage estimates were available Monday, but Sterling said?investigations by his agency are triggered when damage is thought to be more than $1 million.

NTSB spokesman Eric Weiss?confirmed that both the Coast Guard and the NTSB are investigating and said that the Coast Guard will lead the inquiry. The NTSB will also complete an analysis and issue a finding of probable cause in the incident, he said.

A CO2 fire suppression system, a “system of last resort,” could have been used to extinguish the fire but was not, Sterling said. That system, he noted, is “deadly to fire and deadly to human life” and requires that crew members be evacuated from the space before CO2 can be flooded in to choke out a fire. 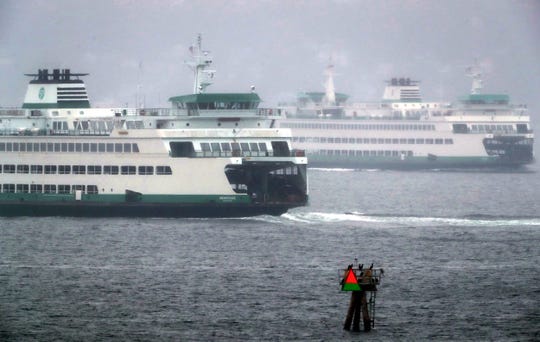 FILE — The Washington State Ferries Wenatchee and Tacoma pass in the fog and rain as they work the Bainbridge Island to Seattle route in September 2019. (Photo: MEEGAN M. REID / KITSAP SUN)

Sterling said CO2 systems had been the standard for many years up until recently, noting that new vessels now use a water misting system for fire suppression. While effective, the former is a “scary system,” he said, noting stories from around the world in which crew members aboard vessels were?killed after a compartment was not fully evacuated or when a system had been deployed accidentally.

“We’re proud of our crews, they’re all highly trained and all firefighters. That came in real handy obviously,” he said. “We’re grateful nobody was hurt.”

The damage will take the vessel out of service “for some time,” Sterling said, which could strain the state ferry system this summer. Before the fire, Wenatchee was not scheduled to return to service until mid- to late May, but with an extended time out for repairs, the agency would only have 20 vessels available for a system that normally requires 19 boats to maintain service, he said.

Vessels that normally should be out for maintenance may have to defer that work, and Sterling said, “Any boat that goes out, there’s nothing left to come in for it. That route is going to be down a boat or we’ll have to steal a boat from someone else.”

Nathan Pilling is a reporter covering?Bainbridge Island, North Kitsap and Washington State Ferries?for the Kitsap Sun. He can be reached at 360-792-5242, nathan.pilling@kitsapsun.com or on Twitter at @KSNatePilling.